Music from ‘A House in California’ 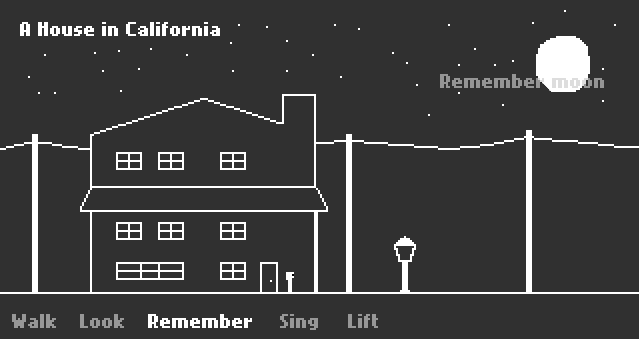 Pictured: An early screenshot of ‘A House in California’

Cardboard Computer is currently working on three different games. I like to work on multiple projects at once, switching organically between them to follow inspiration and freshen my perspective. I’ll be sharing more information about all three games as they develop, starting with some music for an adventure game called ‘A House in California’.

‘A House in California’ is a Flash game about four people building a house together. As I mentioned in a recent interview with Indie Games Channel, the game is a graphic adventure in the vein of King’s Quest or The Secret of Monkey Island. I’m experimenting with some unusual input methods, which I’ll share in more detail once they’ve really firmed up.

Lois (A House in California soundtrack) by Cardboard Computer

This music is for the first section of the game, in which the player controls a character named Lois. It’s set outdoors, at night.